On Saturday, November 17, 2018, the board of Elite Soccer Youth Development Academy Inc (ESYDA), was thrilled to receive children, parents, sponsors, merchants, county representatives, family members, and friends from the community for an evening of conviviality, fun, and recognition.

The 8th Annual Award and Recognition Banquet was nothing short of amazingness and great camaraderie. The purpose of this event is customarily to recognize the accomplishments of the players and the coaches and showcase all the activities that happen throughout the year. It was an opportunity for the parents to meet and thanks to the official sponsors of the event and/or the organization. As a nonprofit organization, ESYDA relies on their support to run some of the programs in its curriculum. Local officials and community members were there to celebrates the kids and their parents.

Opening remarks from ESYDA’s President Mr. Agbegnigan Amouzou officially started the event that took place at the White Oak Recreation Center in White Oak, Maryland from 3:00 pm till 6:30 pm. In between guest speakers, speeches from ESYDA’s board director, the county representative and the parent’s liaison, there were multiple dance performances by Take Back Our Community Dance Group. The event continued with ESYDA’s vice-president and head coach Mr. Oluwafemi Sunday who presented each player with the certificate of Academic Excellence and a medal. Mr. Amouzou presented the MVP Trophies which were for selected players from each category (U4-U18). Furthermore, the president gave a special thank you speech in which he saluted the work of the volunteer staff, and the continued support of the sponsors. That speech was followed by the presentation of plaque to each volunteer and sponsor presents at the ceremony.

A closing remark form the head ESYDA coach, Mr. Sunday, ended the award part of the event, and opened the buffet which was followed by the opening of the dance floor. After a year full of trainings, local and regional competitions, school activities and other life events, ESYDA had to make sure its players end the year on a high note, surrounded by their community.
Heartful thanks to everyone who came out to celebrate with the ESYDA family on November 17th. See you all next year for another successful event.

ESYDA is more than just soccer! 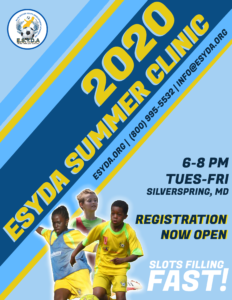